A new report from a privileged management firm (PAM) warns that IT security is getting worse as corporations become stuck deciding what to do and what it will cost.

Delinea, formerly Thycotic and Centrify, on Tuesday released research based on 2,100 security decision makers internationally, revealing that 84% of organizations have experienced an identity-related security breach in the past 18 months.

This revelation comes as enterprises are grappling with expanding entry points and more frequent and advanced attack methods from cybercriminals. It also highlights the gap between the perceived and actual effectiveness of security strategies. Despite the high percentage of accepted breaches, 40% of respondents believe they have the right strategy.

Several studies found that credentials are the most common attack vector. Delinia wanted to know what IT security leaders were doing to reduce the risk of attack. This study focused on learning about the adoption of privileged access management by organizations as a security strategy.

Key findings of the report include:

ID security is a priority, but board purchases are critical

Leaving behind corporate commitment to actually take action is a growing policy many executives are following in relation to IT efforts to provide better breach prevention.

Many organizations are hungry to make change, but three quarters (75%) of IT and security professionals believe that promises of change will fail to protect privileged identities due to a lack of corporate support, according to researchers. .

The report noted that 90% of the respondents said that their organizations fully recognize the importance of identity security in enabling them to achieve their business goals. Nearly the same percentage (87%) said it was one of the most important security priorities for the next 12 months.

However, a lack of budget commitment and executive alignment resulted in a constant stall on improving IT security. Some 63% of respondents said that their company’s board still does not fully understand identity security and its role in enabling better business operations.

Chief Security Scientist and Advisor CISO Joseph Carson said, “While the importance of identity security is acknowledged by business leaders, most security teams will not receive the support and budget they need to provide critical security controls and resources to mitigate key risks.” A solution is needed.” in Delinia.

“This means that most organizations will be deprived of protecting privileges, leaving them vulnerable to cybercriminals searching for and abusing privileged accounts,” he said.

Despite the good intentions of corporate leaders, companies have a long road ahead when it comes to protecting privileged identities and access. According to the report, less than half (44%) of organizations surveyed have implemented ongoing security policies and procedures for privileged access management.

These missing security protections include password rotation or approval, time-based or context-based security, and privileged behavior monitoring such as recording and auditing. Even more worrying, more than half (52%) of all respondents allow privileged users to access sensitive systems and data without the need for multifactor authentication (MFA).

Another alarming lapse has come to the fore in the research. Privileged identities include humans, such as domain and local administrators. It also includes non-humans, such as service accounts, application accounts, codes, and other types of machine identities that automatically connect to and share privileged information.

However, only 44% of organizations manage and secure machine identities. The majority leave them open and come under attack. 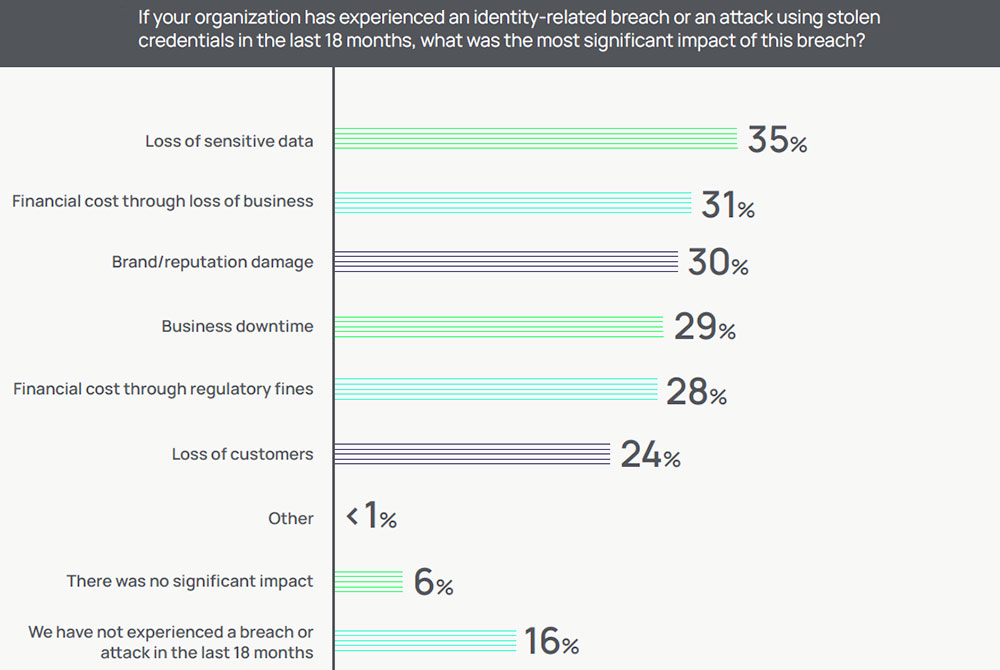 Cybercriminals look for the weakest link, Carson noted. Ignoring ‘non-human’ identities – especially when these are growing at a faster rate than human users – greatly increases the risk of privilege-based identity attacks.

“When attackers target machine and application identities, they can easily eavesdrop,” he told TechNewsWorld.

They move around the network to determine the best place to strike and inflict the most damage. He advised that organizations need to ensure that machine identity is incorporated into their security strategies and follow best practices when it comes to protecting all of their IT ‘superuser’ accounts, which could be compromised if , then the entire business could be put on hold, he advised.

The security gap is widening

Perhaps the most important finding from this latest research is that the security gap continues to widen. Many organizations are on the right track to secure and reduce cyber risk for business. They face the challenge that there still exist large security gaps for attackers to gain. This includes securing a privileged identity.

An attacker only needs to find a privileged account. When businesses still have many privileged identities left vulnerable, such as application and machine identities, attackers will continue to exploit and influence businesses’ operations in exchange for ransom payments.

“Until we address the challenge of communicating the importance of cyber security to the executive board and business, IT leaders will continue to struggle to obtain the resources and budget needed to close the security gap,” he said. warned.

One of the main challenges to achieving identity is that mobility and the identity of the cloud environment are everywhere. According to Carson, this increases the complexity of securing identity.

Businesses are still trying to secure them with the current security technologies they already have in place today. But this results in many security gaps and limitations. He said some businesses fall short even by trying to check security identity with simple password managers.

“However, this still means relying on business users to make good security decisions. To secure identities, you must first have a good strategy and plan in place. This means knowing the types of privileged identities that exist in business. Understanding and using security technology that is designed to find and protect them,” he concluded.