Robots have been around for decades, but they’ve mostly been stupid. They were either controlled remotely by humans or ran fixed scripts that allowed almost no latitude in terms of how they operated or what they did. Even though I was born in the year Robbie the Robot became famous, the robots I grew up with were nothing like Robbie. They were as smart as old toasters.

Luckily, that’s changing. Robotics has advanced tremendously over the past decade, partly thanks to the pioneering work Nvidia has done with autonomous vehicles, much of which has translated into autonomous robotics. At CES this year, Nvidia was on the mind among all the top robots, starting with a robotic tractor from John Deere and ending with the GlüxKind, an AI-powered baby stroller I want to buy for my aging dog.

Let’s talk about the Nvidia-powered robots at CES this week. We’ll end with our product of the week, a wireless microphone that just might keep me from getting into a fight on my next air trip.

John Deere won the Best of Innovation award for its robotic tractor. 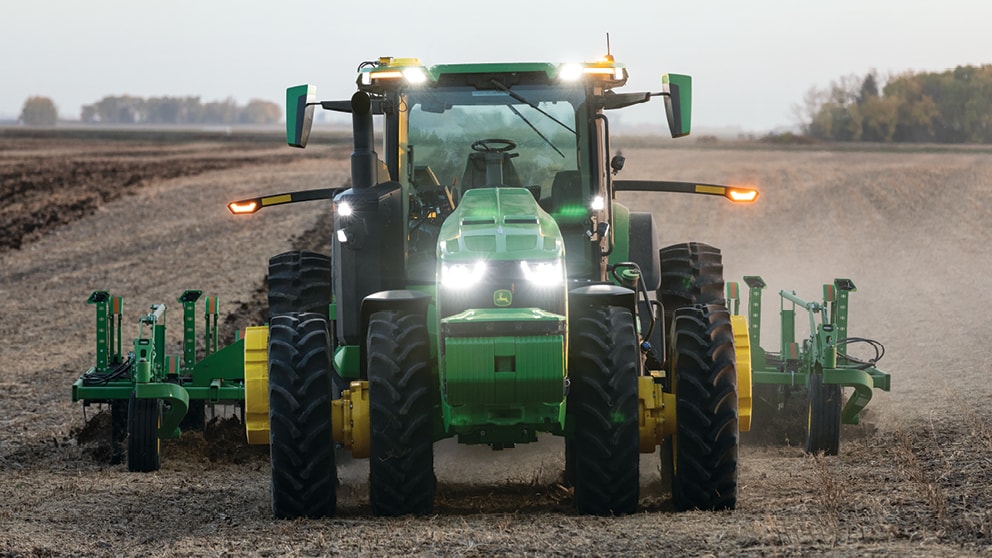 I grew up working on a farm. Driving a tractor was fun in the beginning, but it got tiresome very quickly.

The repetition of driving in the heat and long lines was only broken by the excitement of an equipment failure or the prospect of a horrific death should I fall asleep and fall off the tractor. This actually happened years later to my division head at IBM, who died after falling from his tractor into a plow.

John Deere tractors will not bore, will not tire, will not die, so farmers can work on other jobs that need to be done, considering that staffing farms has become a big problem lately. Historically, robots weren’t cheap on farms because labor was cheap. But now you can’t find those workers, and it’s just as difficult to get local people to work on the farm.

Therefore, if farmers want to continue operating, they need to automate, suggesting that the farms of the future may be run entirely by increasingly intelligent robots and robotic equipment. Therefore, this tractor could be the key to ensuring food on our tables in the future.

Another robot was from Agrist. I am not a fan of it mainly because it was made to cut capsicum and capsicum triggers my gag reflex. Just the smell of things makes me feel sick. Still, if I had to harvest bell peppers (apparently one of my concepts of hell), I’d appreciate a robot like this one that kept my hands, nose, and tongue away from the horrible stuff.

Sometimes you have to grow stuff you don’t like, and this robot will assure me that if I still had a farm—which thankfully I don’t—I could grow bell peppers and plant them without Brought close to something could bite.

Seriously, this robot is designed to work in indoor factory farms, which will be critical to the survival of countries that will be badly affected by climate change and lose the ability to farm as a result. Such robots will be crucial to sustaining humanity as the climate makes outdoor agriculture obsolete.

Drones were also covered, with Skydio Drone standing in for its Scout drone.

Skydio is an attractive drone company. There’s also a docked drone solution that reminds me of the old Green Hornet TV show. Can you imagine putting one of these on your car so you can check what’s causing that traffic jam you’re stuck in? Or imagine a police officer on a high-speed chase being able to launch one of these and have it autonomously and covertly pursue the suspect, therefore saving them life and limb while chasing them in the car. didn’t have to risk it.

Skydio is a powerful company with an increasingly powerful set of autonomous products that could one day save your life, making it potentially one of the most important products launched at CES this year.

I was looking for a powered stroller for my aging dog a few weeks ago. When the dog gets tired of walking, we put it in a stroller, but the mountain climbing thing gets old. When my wife walks all three of our dogs alone, it becomes exhausting and potentially unsafe to manage the stroller at the same time.

When empty, the GlüxKind Ella stroller will follow you (I don’t want to imagine being a runaway with a baby in it). When occupied, it’s battery-assisted for going up hills where my wife often struggles (I’m currently her go-to solution for going up hills). 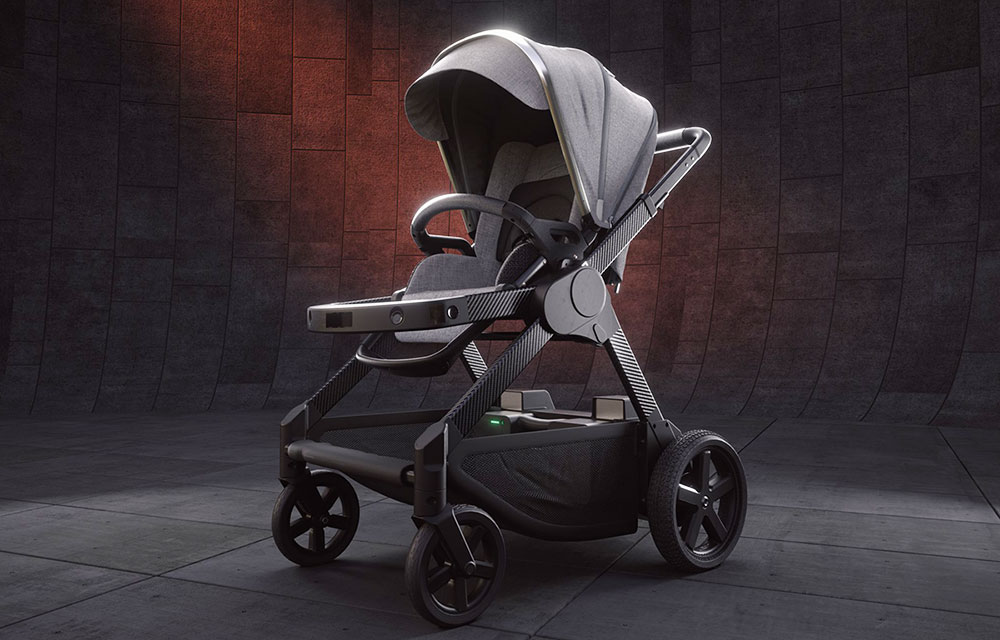 Sadly its current configuration won’t work for my dog. Otherwise, I would probably have ordered one. But trying to teach a 14-year-old dog to sit like a kid in a stroller is a non-starter, although it does shock others a bit when we walk by. Still, for parents with multiple children or those looking to walk their dog and child at the same time, this powered stroller could be a winner.

Now, if they would just come out with a pet configuration, I’d be all in.

Nubility’s self-driving robot, named Nuby, is one of the newer delivery robots to hit the market.

I’m a little worried about this class of robot. In tests, children and some adults often abused and broke these robots when in use. The Newbie is bigger and more robust from what I’ve seen, but I imagine it may need some sort of defense or high-speed escape capability to work in the real world.

Onboard cameras should capture and record anyone who damages it, but it may take a while for people to leave the thing alone to do their job. For this reason, Nubility is smartly targeting golf courses where the robots can be better protected. Places such as resorts, hospitals and factories would be where such robots could operate most successfully.

I’ll wait to see if they develop one with a built-in taser before putting too much faith in delivery robots outside controlled environments like golf courses and resorts.

Still, once accepted and protected, robots of this class will likely make home delivery by humans a thing of the past, better assured you’re home to receive the delivery and no more to the porch pirates. Make life very difficult whom I hate with a new found obsession after this past Christmas.

Seoul Robotics demonstrated a Level 5 control tower, typical of the way autonomous cars are currently configured. It uses infrastructure outside the vehicle to manage the automobile, potentially enabling any current-generation car with Level 2 technology that is connected to that grid to operate autonomously. Is.

This variant is interesting because, rather than thinking of autonomous cars as they are now, it thinks of them more as how an air traffic controller monitors all cars in range and directs them from a central resource. Eventually, this technology could replace things like traffic lights, effectively moving them into the vehicle when it is being driven by humans and making them invisible to people riding in autonomous cars.

Not only could this approach be much cheaper than putting this technology in every car, but it would also shift maintenance from the car owner to the government, which could maintain it better, although this is not always a given.

It could also help ensure fewer catastrophic problems and allow older cars to better interoperate with newer autonomous vehicles, while providing a viable low-cost upgrade for those building more recent cars. wanted which are not currently autonomous functions like they were. This is arguably the most innovative approach to the autonomous car problem I’ve seen, and I’m thrilled by it.

while the autonomous wheelchair

Finally, Whill presented its autonomous wheelchair designed for people with limited mobility and vision. Older or partially disabled people who cannot see well are heavily dependent on others because the white cane approach does not work in a wheelchair.

Winner of the Best of Innovation Award in the Accessibility category, this wheelchair features unique high-traction tires and a rear bin to hold packages or groceries. It sounds a bit like a science fiction movie.

With 12 miles of range, the ability to climb over 3-inch objects like curbs, and very high stability for rough roads, it could be ideal for aging seniors and those with vision and mobility problems. At 5.5 mph, it’s anything but blazing fast, but if you have mobility and vision problems, you probably don’t want blazing fast.

Weighing in at 250 pounds, it’s lighter than many motorized solutions for people with limited mobility, and its autonomous capability provides freedom that some people might not get any other way.

This list of robots at CES is by no means exhaustive, but I realized that Nvidia was the brainchild of most of the robots I saw, so I thought I’d use that as a theme for this column. The autonomous robot revolution is just getting started, with the hope that we never go far enough to make the book robopocalypse a reality.

Over the next decade, these will unfold at an increasing pace, and Nvidia has placed itself at the heart (okay, maybe more at the brain) of these efforts. After all, we can be like George Jetson and have a maid like Rosie who’s autonomous, robotic, and with just the right level of snark.

At CES, I Saw My Robotic Future. I can’t wait until I have my own rosé!

Before Christmas, I took my last trip of the year to New York. Before taking off on the return flight, I had to do a radio interview over the phone. While the person next to me was fine with it, the guy in front of me was not and it looked like I was talking too loudly because he was about to hit me. I have a trained media voice, and that goes a long way.

Having a solution I can be a lifesaver when doing these things especially if we get to the point where we are making inflight phone calls and don’t want to annoy or accidentally entertain everyone on the plane with our conversations – Let alone accidentally share confidential or personal information.

The Mutlock VR microphone was one of two products launched at CES that can include your voice when you speak.

I’m choosing Mutalk because it was also designed to work with the VR rig I play with in VR, the Mask by Skyted, which was huge and apparently designed for inflight use Made it more appealing to me than it was. , To be honest, I’d be fine with either, and I have to admit that even a whole mutable rig on a plane might be a bit much.

Finally, something I can use for making calls in areas with a lot of ambient noise or when I need to be punched when I need to speak loudly. So, the Mutalk Leakage Voice Suppression Microphone is my Product of the Week.