Germany-based Tuxedo Computers has released its specific operating system as a stand-alone distribution that provides a reasonably productive choice among a bloated supply of Linux variants.

Previously, you could only get Tuxedo OS pre-installed on company computers. Now anyone can try it out as a separate distro, making good on its mission statement of making Linux accessible to the general public. At first blush, Tuxedo OS is identical to a default install of Kubuntu (Ubuntu’s classic iteration of the KDE distro), just with custom startup and shutdown screens and wallpapers.

Buying a dedicated Linux computer instead of reusing new or old Windows or Mac hardware is often hindered by a lack of manufacturers. Perhaps one of the more well-known and accessible outlets is US-based System76, which has launched its own in-house Linux version, POP! _OS as a separate Linux distribution.

Tuxedo Computers based its OS on Ubuntu 22.04 LTS and fine-tuned the KDE Plasma desktop to accommodate its own hardware. System 76 tweaked GNOME Desktop. Both versions run on most computer configurations without hardware requirements or the need for a dedicated set of additional software.

Don’t let the Tuxedo OS version 1.0 label deter you from trying out this latest Linux offering. The actual coding has been around as long as the pre-installed OS on the company’s hardware lineup. Therefore, its public release is far more polished than its version 1.0 moniker.

The KDE Plasma Desktop is not a full clone of what you can download in other iterations. The in-house developers took six months to develop, test, document and design the stand-alone offering. 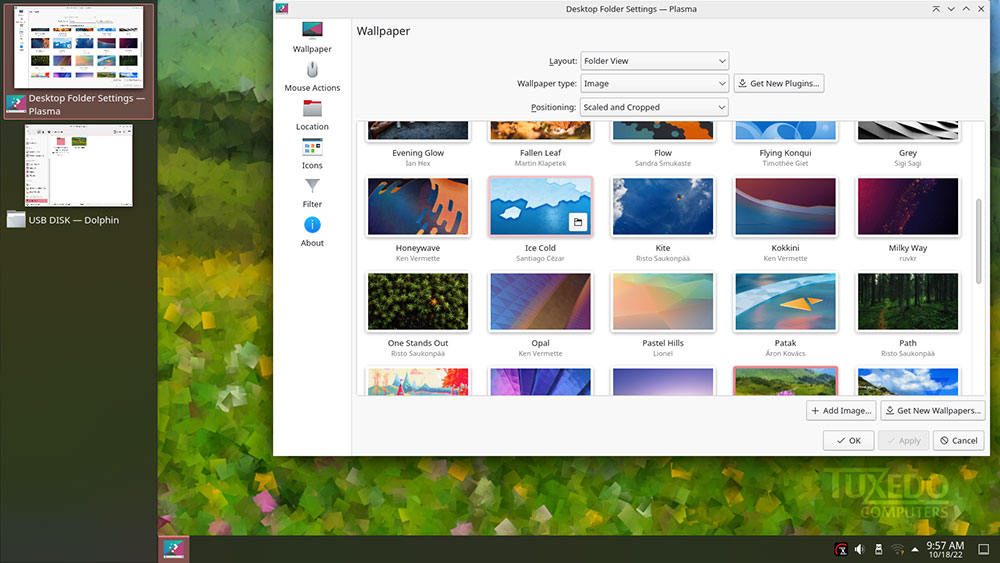 These include an accent color and wallpaper set, a natively packaged Firefox and Nvidia drivers. Flatpak comes pre-installed instead of Snap, though it’s disabled by default unless you flip the switch for this alternative software distribution package.

My biggest disappointment with Tuxedo OS is the cluttered approach to setting it up. Especially for newcomers to Linux, developers made running live sessions — whether from DVD or USB thumb drives — anything but convenient.

So much so that I almost gave up on installing it out of frustration. Once installed, the operating system is a relatively pleasant experience, provided you prefer the KDE desktop. Loading it up to try it out before even clicking the Install button is a painfully slow process of trial and error.

The problem is not with running an OS originally made for factory installation on dedicated hardware. Developers need to design a more “fail-proof” installation engine if they expect users to adopt Tuxedo OS.

My horror story started with a sophisticated GUI-driven interface. Typically, with most Linux installations the process boots the computer with the ISO files into an easy-to-follow menu where you click on an option and go to the next set of options. But this menu was confusing and often didn’t work without heavy troubleshooting.

For example, the first screen shows options like “Boot from USB/HDD” and “Boot from DVD/VM”, followed by options like “WebFAI Notebook” and “WebFAI Desktop Installation”. Then there was a separate list for “UEFI Firmware Settings”.

Any readme file options or other sources of information about the meaning of the options were lacking. The menu and website were of no such help.

The first option is ambiguous and suggests starting the computer from a hard drive or removable media. How was this different from the other option specifying HDD or VM?

When I selected the top option, the result was only a terminal screen displaying command prompt. The second entry started the live session of the temporary virtual machine through the ISO installation medium.

But it only works on computers configured with an agreed BIOS setting. Since I tried the installation on four different computers, some had BIOS settings, and some had UEFI settings already disabling Secure Boot on Windows machines.

On some of my machines, the installation started and wandered along the way, and on others, it never started. That encounter prompted me to play with the menu’s fifth option, which involved changing the BIOS and UEFI settings.

I later learned that Integrated WebFAI (short for Fully Automated Installation), a custom Linux deployment tool, requires a special USB key, which the company provides, or you can create one yourself, assuming So that you know the directions. It also requires a wired network connection to complete this type of installation.

Each attempt to install this distro resulted in the painful omission of blank screen before the first menu screen was displayed at the end. Seriously, I mean up to 15 minutes. Sometimes the blinking indicator light on the optical drive would go off, so I had to wait for the blinking to resume before I turned the box off and tried again.

Once I got the right combination of options on one of my four test bench computers, the DVD installation was completely complete. The time factor to do this was much longer than what I typically experience in most other Linux installations.

Once the actual installation process has gone beyond the initial menu selection, response times vary from step to step. The starting language is the default German, and I had to figure out that I needed to click a blank entry field at the bottom of the screen to activate the languages ​​list.

On some of my test gear, the window never opens; On another rig, creating a language selection or time zone with a location lock locks the computer.

On a computer that actually went through these steps, a progress bar increased to 40% and seemingly froze. Then, after a gap of 10 or more minutes, the desktop started showing up on the screen so I could start trying out Tuxedo OS.

I didn’t test Tuxedo OS after the live session. So whatever glitches were waiting for the hard drive installation to complete, I’ll never know.

This public release without pre-installation on Tuxedo computers will once more invite developers to pull out the installation ISO. The tweaked combination of Ubuntu 22.04 Roots and the revamped KDE desktop brings some useful features to the package.

It comes with LibreOffice and a small selection of games pre-installed. It also includes a Tuxedo Tools group with two custom applications installed and the Tuxedo Control Center system-monitoring app. Tuxedo WebFAI Creator runs as a panel applet by default, although you can easily turn it off.

The developers bundled the OS Probe feature by default. Before Grub 2.06, it was easy to install Ubuntu as a dual boot next to other operating systems. Prober detected the other OS and gave users a boot menu to choose which OS to use for each session.

The same ISO handles encrypted and unencrypted options when installed on a hard drive. A corresponding prompt appears before the installation begins.

The stand-alone version of Tuxedo OS lets you choose the file system of your choice. So, you can configure btrfs or XFS in addition to the standard ext4.

No doubt, I’ll circle back when the developer releases the upgrade. Neither KDE nor GNOME is a compelling reason for me to swap out my favorite daily driver yet.

But Tuxedo’s approach has piqued my interest and it has the potential to take a mainstream platform position. I use a number of KDE applications on my main productivity computer, and now the “newer” distro has a lot in its suite of apps bundled in. You can find Tuxedo OS on the Tuxedo Computers website.