I was lucky enough to have a chance to spend some time with Amazon’s new robotic sidekick, Astro, over the past week.

Possibly named Astro because of Amazon’s fondness for the beloved dog on the 1960s cartoon series “The Jetsons,” it’s now available on an invitation-only basis for $1,000. However, the price will eventually climb to $1,450 when it is open to the public.

Seven days is too short a time to assess the new technology, but I think it’s enough to form some early opinions about this ambitious piece of hardware.

After spending a week with the product, I’ve concluded that it largely succeeds as a luxury item, especially for consumers who have the disposable income to test out the latest bleeding-edge robotics technology. Although the usage models are limited.

To be clear, this is not a slam against the Astros. Such products pave the way for more compelling future solutions with broader mainstream appeal to eventually hit the market. Astro is an attractive solution with significant potential. Still, given its premium price point, it won’t get enough audience and most importantly, what it can be used for in limited cases.

What is Amazon Astro?

If someone didn’t know better, they could mistake the new Amazon Astro with the Echo Show 10 Smart Display on oversized wheels. From a side view, it looks like a reduced-sized non-passenger version of the iconic Segway personal transporter equipment commonly seen in airports or shopping malls.

The Astro features a motorized 10.1″ screen and a 5MP camera that facilitates video chat and video/image capture. Two 55mm speakers embedded in the front deliver surprisingly good audio with excellent bass. There is some weight, which weighs in at 20.6 pounds and is roughly the size of a footstool.

Like the popular Echo Show model, the Astro TV Show is fully Alexa-compliant with the ability to stream content, play music, answer questions about almost any topic, and control Alexa-based smart home devices .

The Astro is equipped with several highly sensitive array-based microphones, and its listening skills are exceptional. This is notable because array microphones have traditionally been used to measure and detect noise sources, a feature important to its home security monitoring capabilities.

However, what separates the Astro from a stationary Echo Show is its ability to move and change its viewing perspective. The Astro features a periscope design that rises from its pivoting head and provides additional 12MP camera support.

The obvious usefulness of the cameras is that the Astro can travel through your home when you’re out and about to capture video and images. The Periscope also includes manual mute and volume buttons, though you’re unlikely to use them as it can respond to voice commands like any Alexa-class speaker.

The navigation performance of the Astro is one of the things that the Amazon engineering team deserves to be congratulated for.

While the out-of-the-box setup process is surprisingly easy, it takes the Astro about 30 minutes to do its initial run to learn all the rooms on your ground floor.

After setup was complete, the Astro could easily travel to any room I specified via voice commands. The Astro never collided with anything in its path, and it never hit the lovely miniature pinscher I live in my house. Its large wheels allow the Astro to travel on both rugs and hardwood floors without apparent difficulty. 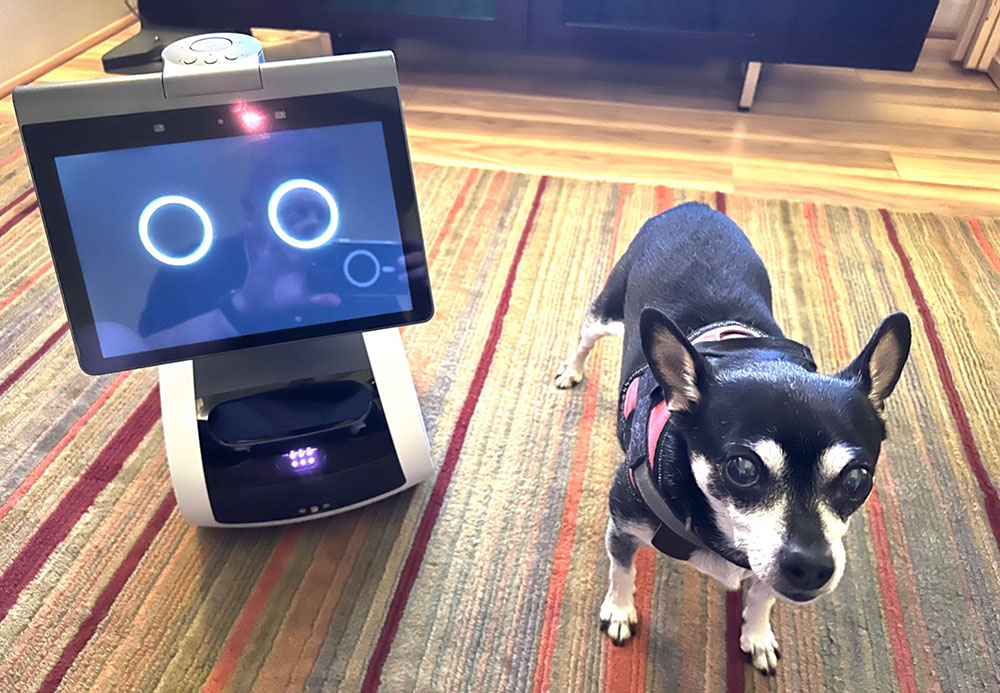 Carmel was never threatened by the Astros while traveling through my house. (image credit: SmartTech Research)

Last month, Amazon announced that Astro would finally acquire pet monitoring capability and check your doors and windows to notify you if they’re not safe. Amazon supplies many colleges with Astro Software Development Kits to create even more automated processes.

Something to keep in mind: The Astro exhibits bizarre behavior, even when docked in its charging station and appears to be asleep. Although thankfully it didn’t do it late at night, Astro used two animated eyes and lively beeps, I guess, to make sure you know it’s on your back and on call.

This might sound ludicrous to some, but it’s clear that Amazon wants the Astro to have a distinct personality that separates it from its family of smart displays.

The $64,000 question that mainstream users want to answer is about the usefulness of the Astro. As mentioned above, the setup process was remarkably smooth with on-screen directions, and it took just a few seconds to connect to my home network.

Although having an astro is undoubtedly one of the more interesting conversation topics an owner will have a cocktail party in their home, what can it really do?

The Astro has a dual cup holder that allows you to carry drinks from room to room, though I can’t imagine being so lazy I’d use that feature. Sure, it’s easy to give the Astro a voice command to get to the kitchen, but it can’t get drinks out of the refrigerator. It’s the kind of Jetsons-like feature that will be a game changer. 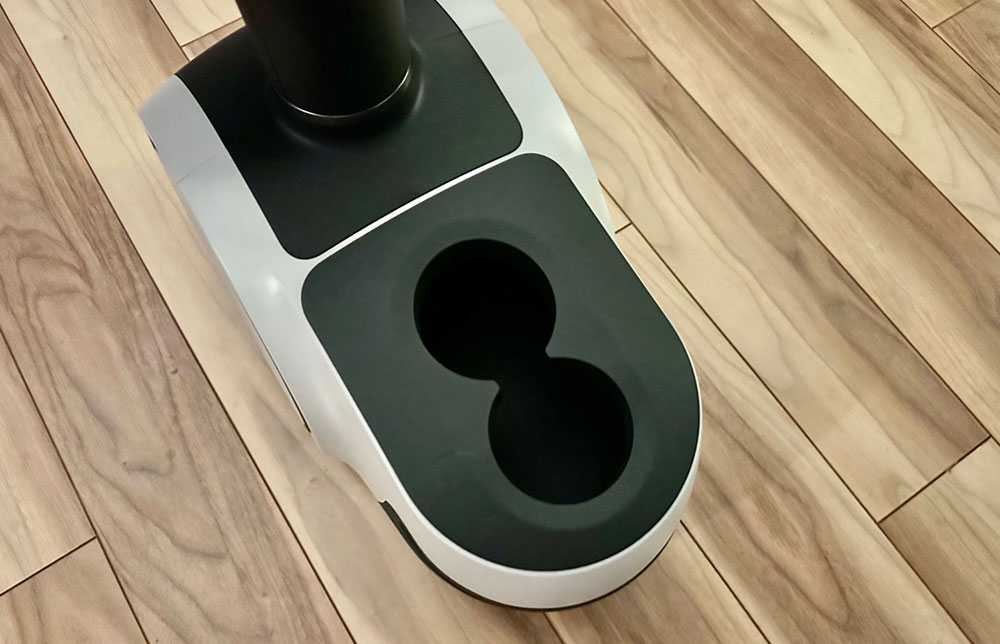 The most serious use model of the Astro is its ability to function as a mobile sentry in your home. A camera-enabled robot that can travel throughout your home and work synergistically with Ring smart door locks and external cameras via Alexa Guard.

I believe many mainstream consumers will love taking advantage of the Astro’s remote-control camera functionality. When the Live Feed feature is enabled through its app, Astro sets up a ring to notify others nearby that they are about to be on camera.

The periscope extends out from the Astro to provide a clear and vibrant view of the house. The app also provides manual support for controlling the robot’s movement in different directions for different views – even sliding the periscope up or down for different perspectives.

Astro really excels as a security tool when you are away from home. When paired with a Ring Protect Pro subscription, the Astro can patrol your home and send notifications to your smartphone when it detects strangers or hears loud noises like breaking glass.

There’s also the ability to enable a siren on Astro to scare away intruders from afar. I successfully simulated someone making a loud noise to throw a tennis ball through a nearby window, and Astro dutifully traveled to what he believed to be the location of the noise.

It turned on the siren and sent an alert to my phone. My testing wasn’t scientific, and I can’t confirm that Astro will function flawlessly in comparable security scenarios, but the use case is promising.

Aside from having a mobile security platform inside your home—and that, in itself, may be enough for many people to buy one—its other use cases are limited and few.

After all, the Astro can’t take out the trash, and it doesn’t function as a robot vacuum. Amazon touts the Astro as a device that kids can play with, as it can sing and dance, but $1,500 is a premium price for a novelty that wears off quickly with kids. Will go

A strong case can be made for the Astro’s entertainment and video conferencing features, as it’s intriguing to have a mobile device for video chatting with other Echo Show owners. In addition, speakers with great sound can be valuable at parties as the Astro can follow you to play music in your home.

The bottom line is that the Astro is a fascinating device that Amazon has a lot to be proud of. Here’s a short video I made from Astro in action:

Even in the case of limited security use, the Astro has significant potential. It would be misleading to see other use cases being developed (perhaps by parties outside Amazon) not currently considered.

Its navigation capability is superb, and the Astro’s overall quality and construction materials are excellent, convincing for such a high-priced device.

In the end, Amazon deserves recourse for doing a remarkable job of protecting your privacy with Astro. Given Amazon’s spotty record on privacy, it’s a step in the right direction given that Astro stores and processes most of its navigation and facial recognition data locally, on the device itself.

In line with other Alexa-based smart speakers and displays, users can also delete query history via the Alexa app. This capability is important because video equipment, which is increasingly visible inside people’s domiciles, has the potential to record highly personal and intimate moments. For this new category to gain mainstream traction, eliminating the privacy concerns that many consumers have is non-negotiable.

Still, $1,500 is quite a discretionary spend for a large portion of the population, especially with sky-high gasoline prices and inflation running close to 9%.

It’s hard to recommend the Astro at this price point until its usefulness outweighs that of an indoor mobile security platform.

Astro is an exciting solution that showcases Amazon’s significant technical chops in the budding consumer robotics sector. At the very least, early adopters who get one will be the talk of their neighborhood.